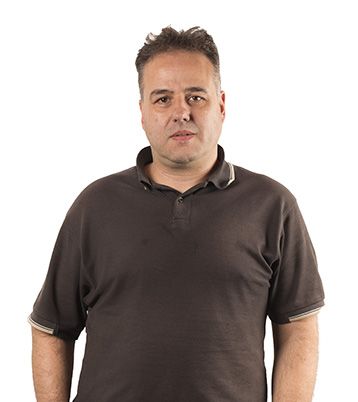 Toni París is the instructor of the subjects ‘Recording techniques’ and ‘Mixing and mastering for acoustics’ in EUMES.

He has worked as a live sound technician for 10 years and, since 2001, combines this task with the technical direction of the 44.1 recording studios, which are located in Aiguaviva.

He has worked in mixes for sound tracks in movies such as ‘The Wolf’ (O.V. ‘El Lobo’; Filmax) or ‘Salvador’ (Mediapro). He has worked with renowned artists of different styles: he has mixed more than 100 Jazz records of national and international performers such as Guillermo Klein y Los Guachos, Nicola Sabatto & Jeff Hamilton, Llibert Fortuny, Raynald Colom, Spanish Brass Luur Metals or Big Mama, among others. He has also undercarried Pop-rock projects for well-known national artists such as Nena Daconte, Pedro Javier Hermosilla, Els Amics de les Arts and other singers such as Mayte Martín, Nina, Beth, Lluís Llach, Maria del Bonet or Gerard Quintana.

He has also worked for television music projects in programmes like Oh happy day, Kubala Moreno i Manchón or Gran Nord.