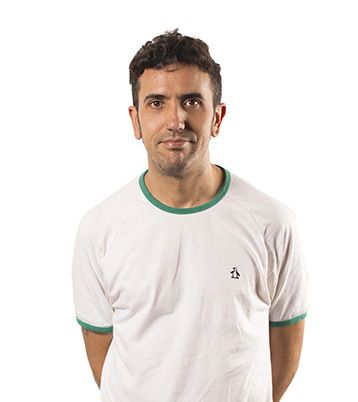 Eduard Pérez Bach is the artistic director and coach at EUMES.

He is the promoter of the EUMES Showcase and artistic manager of the agency Springboard Entertainment. He is currently a juror of Movistar Artsy and coordinator of Negrita Sound Talent.

His solid knowledge on music, acquired since he started studying music theory at 6 years of age, allowed him to evolve rapidly within the music industry and launch himself as a DJ in the legendary club La Sala del Cel, where he established his residency for 10 years (1996-2006).

In year 2000 he created the first electronic music record label, Exploited Dj’s Records, where he could collaborate with artists like Valentino Kanzyany, Rino Cerrone and Frank Muller, among others.

During his career as a DJ he has been on tour an European Level with renowned artists within the electronic music scene such as Jeff Mills, Sven Väth, Laurent Garnier, Marco Carola or Justice.

In 2006 he started his career path in the field of events planning and management, by creating Bollotronik Parties Bcn-Mad, La Sala del Cel Parties and Pacmad Club.

In terms of image, he is sponsored by Pepperline and collaborates with international brands such as Red Bull.